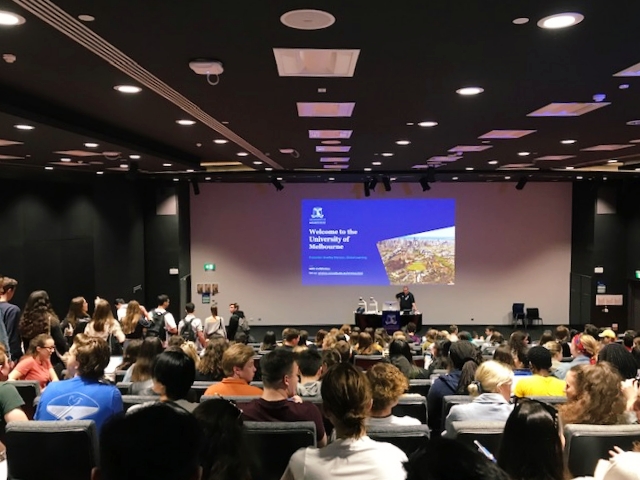 My first week at the University of Melbourne (UM) went pretty well, except for getting lost a lot.

The classes I am taking are quite interesting and my professors all seem very knowledgeable and engaging. My Cultures of Law professor specifically is quite cool! Her whole demeanour is incredibly approachable, and I know for a fact I will be looking forward to her lecture every week.

Surprisingly, the university structure is quite different than what I was originally expecting. I had assumed because Australia is quite similar culturally to Canada that the university environment would be as well. It’s not shockingly different, but different enough to throw me off a bit.

In Canada, I’ve found that tutorials are rare and usually only for specific subjects that require a more detailed understanding of the teachings. Here, there is a single lecture a week, often followed by a tutorial. Other than my seminar class, all my lectures have a tutorial. This certainly isn’t a bad thing as the tutorials are meant for the students to dive a little deeper into their course content and discuss the subject matter in depth. I love to get into classroom discussions, so I’ll likely enjoy this difference.

Another difference is the way most classes are graded. Grading itself is still along the same lines, but there are only two or three assignments that are graded, no mid-terms and (depending on your year level) no sit-down final. Most of the classes I’m taking are using the main research essay in lieu of an actual final. Luckily, I don’t mind this type of grading as I tend to spend a lot of time on my assignments whether they are worth 20% or 60%.

For me, the one thing I think I might struggle with regarding the difference between classes in Australia and in Canada is that I’ve found that classes here are a lot more reading intensive. Looking at the readings I have for Week 1 and Week 2, almost all my classes have an average of 80 pages of required reading each week. On top of that, my classes also have quite long lists of suggested readings and I’m not sure yet what the expectation is for that. Obviously, the readings are a university requirement and I’ll be doing them, I just know that my willpower to read them in-depth will start to falter around Week 7.

Who knows though? Maybe having only a few assignments to concentrate on will free up some of my brain space.

Administratively, UM is very much the same which makes much of the transition easier. They even use Canvas as their learning platform. Instead, the biggest problem I ran into was locating my classrooms. It should not be as hard as it was. First, there aren’t any easily locatable maps to direct you to rooms. Second, if there is a map, it is not labelled with the name that is found with the class information. And third, nobody else seems to know where rooms are either. I asked students, staff and basically anyone I came into contact with. Not one person was able to point me in the right direction. Thankfully, I know where all the rooms are now, but it was hectic.

Now I just have to get myself back into the university rhythm and then I am golden.