Movie Review: To the Bone 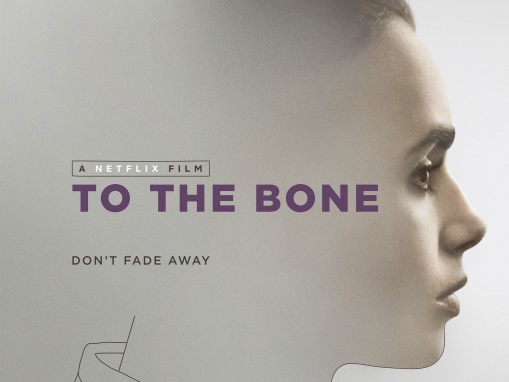 Saturday night — I am scrolling through Netflix, like one does on an “eventless” evening, trying to find something new and worthwhile to watch. A surge of excitement courses through me as I see a starved Lily Collins wearing insane amounts of black eyeliner; “finally!” I think, “something important and underrepresented.” Eating disorders, although extremely common in North American society, are seriously misunderstood and rarely talked about. I applaud and will watch any movie that tries to tackle this difficult topic, and so I pressed play.

To the Bone, directed by Marti Noxon, who herself has battled eating disorders, tells the story of a young white woman, Ellen (Lilly Collins), at a moment when anorexia has taken over her life. The movie starts when Ellen gets kicked out of a treatment facility, being described as “defiant and a bad influence to other girls.” After several failed attempts at various in-patient facilities and closer than ever to death, Ellen has given up. However, her quite extravagant and overbearing stepmother (Carrie Preston) is not ready to give up hope. She takes Ellen to a specialist (Keanu Reeves) who is said to used “unconventional” and “radical” methods. Dr. Beckham insists Ellen go to his inpatient facility, and although reluctant at first, Ellen agrees. There, she meets six other people suffering from eating disorders, amongst them Luke (Alex Sharp), a ballet dancer that will try to show Eli (Ellen’s self-appointed new name) that life is worth living and eating is not as hard as she thinks.

Before I start dissecting the movie, it is important to warn people that the film does not shy away from graphic representations of anorexia at its worst, not to mention the talk about food, methods to resist treatment and such, which can all be triggering.

The movie engages you from the beginning and this probably has to do with Collins’ excellent depiction of the mental state of a person suffering from anorexia. Because of Ellen’s cataclysmic negativity, the viewer finds themselves enrobed with a sense of hope that this movie will be about her journey towards a more optimistic outlook on life and herself. In this sense, the movie delivers. It does a powerful job of portraying some of the thought patterns and behaviours of people suffering from eating disorders, like the incessant sit-ups, smoking, and the concealing of “barf stash” in a treatment facility. The movie sheds light on how everyone’s journey of recovery is unique and difficult in its own way.

Nevertheless, To the Bone left me wanting so much more than what it did. At times, the characters’ motivations lacked rhyme and reason. Ellen’s journey and what led her to this particular point in her illness are tremendously underexplored, not to mention the various subplots the movie opens up but barely grazes upon. One of these is Ellen’s history as a talented artist. The only thing the audience ever gets to know about this is that a young woman killed herself because of Ellen’s artwork which depicted … who knows? The movie never really shows Ellen’s artwork or comment on things such as “thinspo” or “pro-ana.”

This in itself is damaging to the movie’s message and to the audience. Various critics have pointed out how To the Bone has the potential to glamourize anorexia and become one more representation that adds to the thinness fetish spreading through our society. And that’s also the thing; this is only one very sensationalist portrayal of anorexia. The way Lilly Collins lost weight cannot be justified with arguments of authentic representation. Eating disorders come in all shapes and sizes, they happen to more than just white, middle-class women, and anorexia is not the only eating disorder people battle.

It was extremely irresponsible of Netflix to cast a woman that has a history with eating disorders for this particular role. I am not in a position to take agency away from Lilly Collins, but I will say that the drastic weight loss was not necessary to be truthful.

Of the seven patients in the facility, only one was an African American woman with a binge-eating disorder, and only one was a young man suffering from anorexia. Not only was the movie lacking representation, but the few opportunities it had to share more than the white, female experience with eating disorders, it completely wasted in lieu of a romantic sub-plot between Luke (the one male patient in the facility) and the protagonist.

Can we please have just one movie that does not involve romance? One movie in which it is up to the protagonist, and not a powerful and hopeful male figure to swoop in and save the day? Unfortunately, To the Bone heavily relies on this trope of the male saviour. Although Sharp’s characterization of Luke as the lively and bubbly ballet dancer is endearing, heartwarming, and hilarious, this did not make me forget the fact that he, the only male in the facility, is the one who seems to be struggling the least and the one upon whom the movie thrusts the responsibility of superhero. It is Luke who appears in Eli’s final dream as a manifestation of everything that is good in life and everything she would be missing out on if she does not return to Dr. Beckham’s facility to continue her treatment.

Speaking of Dr. Beckham, he barely makes any appearance in the movie other than to put into practice his “unconventional” and “radical” methods which have nothing unconventional or radical about them. When Ellen points out she barely knows anything about this doctor, it is because she, in fact, knows nothing about him, his personal life, or even what motivates him to help youth suffering from eating disorders. Apart from a few instances of swearing and brutal bluntness, Keanu Reeves seems to appear in the movie only as the figure of the attractive and inspirational doctor that saves his female patients.

It seems that to maintain this status, however, it was necessary for Collins’ character to have an absent father figure that could readily be replaced by Dr. Beckham. Ellen’s dad is constantly mentioned in the film, to what purpose, I do not know. The audience never gets to see him or even know what he does and the motivations behind his absence. All we get about this man is the scant dialogue that the other characters share about him, making him a useless figure within the film.

All in all, I appreciated two things about this movie: the powerful performance and how it tried to initiate a difficult conversation. However, the final product was ultimately underwhelming and quite unoriginal. I had a difficult time understanding a lot of the characters and the motivation behind their actions because backstories were barely explored. This hindered the representation of such an important topic. The experiences described do little to nothing to help break societal taboos about anorexia. The depictions of eating disorders in the movie could potentially contribute to the mindset that some people are not ‘sick enough’ to ask for help. This is never true, and the movie could have done a better job of exploring some recurring thought patterns that bring people to Ellen’s physical condition.

You do not have to be ‘to your bones’ to have an unhealthy relationship with food and your body. I hope that in future representations of eating disorders, these ideas will be better expressed.