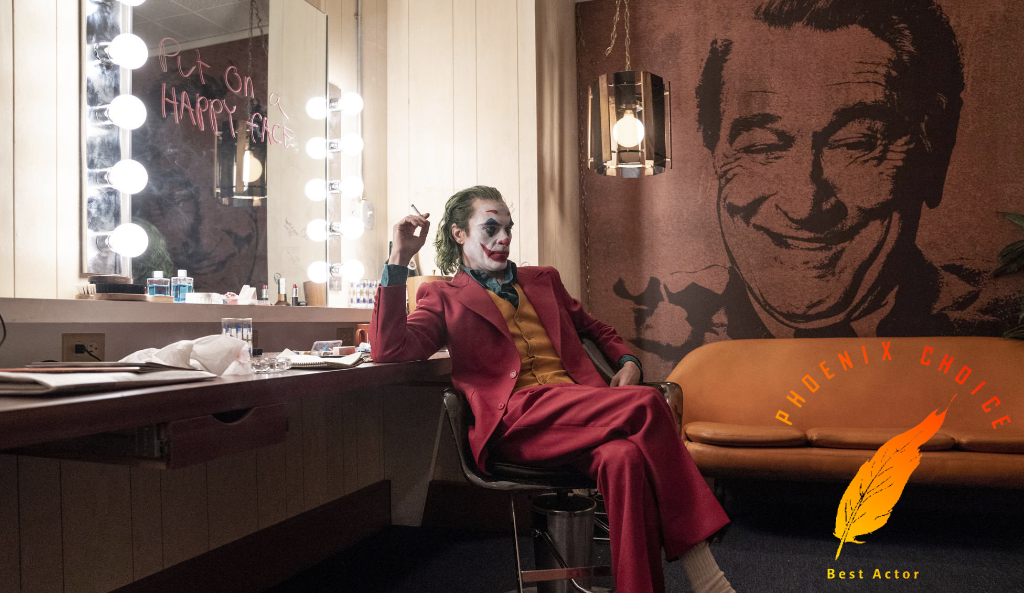 Who Should Win: Joaquin Phoenix – Joker

Warner Bros.’ solo take on DC Comics’ highest-profile villain was easily one of 2019’s most anticipated movies. It was also one of the year’s best-received films, winning the Golden Lion at the Venice International Film Festival before going on to score multiple perfect-score reviewsand finally being nominated for 11 nominations at this year’s Academy Awards. It’s very likely Todd Philipps’ social satire Joker will garner at least a few wins; certainly the most likely one is Best Actor for lead Joaquin Phoenix.

Phoenix plays Arthur Fleck, a down-on-his-luck, mentally unstable, socially inept loner who works at a clown temp agency. Fleck is unsatisfied with his job, his life, and the world in general, living each day unenthusiastically as society around him begins to collapse under the pressures of class disparity. After Fleck is beat up in an alleyway while working as a sign spinner, a co-worker gives him a pistol, setting his life on a rollercoaster of a path that ends in Fleck becoming a symbol for the broken, downtrodden, and ignored of Gotham City.

While Joker is far from a perfect movie, Phoenix’s performance as Fleck is nearly flawless. The actor delivers a startling depiction of depression, as Fleck progressively detaches from his friends, family, and ultimately life itself. Fleck reacts to his surroundings in a way that seems barely conscious of them. Fleck is sometimes selfish, sometimes random, but rarely ever acts with any conviction – at least initially. He’s a man living as much or more in daydreams than reality. Fittingly, Joker gets progressively more dreamlike as the movie progresses: it’s difficult to tell whether several scenes near the end of the movie are real, and some in the middle are explicitly revealed to be false.

Joker draws heavy inspiration from Martin Scorsese’s Taxi Driver and The King of Comedy, and Phoenix deftly channels Robert De Niro’s character from both movies. Like Driver’s Travis Bickle, Fleck is disillusioned with the world. Like Comedy’s Rupert Pupkin, he’ll often retreat into daydreams, enough to blur the line between real and fake. All three are narrators so unreliable it’s hard to tell if any of the film is real even within its own world.

It’s easy to see Joker as the story of a man who was pushed over the edge, but there’s very little to make it a cautionary tale. From the start, Fleck is antisocial and self-interested, and harmless only because he’s lacking in opportunity. Given the chance, Fleck resorts to trespassing, stalking, and murder in attempts to change his life for the better. Joker doesn’t pretend its protagonist is righteous, and yet Phoenix plays him with such endearing loser-charm that any audience could be forgiven for sympathizing with him. Fleck commits a brutal triple-homicide, then does a dance; lies to the police, then runs into a sliding door; executes a celebrity, then delivers the dead man’s catchphrase. Phoenix sense of comedic timing allows him to play a homicidal maniac one minute, lovable oaf the next, all while allowing both time to shine. Phoenix also manages to be generally creepy, most notably through his distinct, unsettling Joker-laugh which never quite hits at an appropriate time. In some movies, the role of Fleck could easily be split into three distinct performances, but Phoenix brilliantly manages to portray every aspect of the character with ease.

Though the Academy normally ignores superhero movies (with some notable exceptions), the Oscars have already honoured the role of Joker. With Phoenix delivering what even many fellow actors consider one of the finest performances ever put to screen, it’s a safe bet that the Academy will once again reward the Clown Prince of Crime.

Luce Edgar (Kelvin Harrison Jr.) is a popular high school senior, an all-star athlete, accomplished debater, and likely valedictorian. He’s also generally well-liked by teachers and parents alike, with the notable exception of his history teacher, Harriet Wilson (Octavia Spencer). Edgar dislikes Wilson, who suspended his friend DeShaun, which also resulted in his suspension from the school running team. In retaliation, Edgar begins messing with Wilson, first by writing an inflammatory essay, then through increasingly sinister acts of vandalism, gaslighting, and character assassination.

The rivalry between Edgar and Wilson is at the heart of Luce; the performances from Harrison and Spencer are among the best of a year crowded with excellent acting. Harrison’s portrayal of the titular character is intensely likeable: a gifted kid who seems good-hearted, unpretentious, and authentic. He’s also more than book-smart, demonstrating a high level of societal awareness and political savviness. Though Edgar is, in some ways, an antagonist, his motivations are clear and philosophically sound, and it’s at times hard to see him as anything other than the hero of the story. Though the movie refrains from showing Edgar as a “good guy”, it also never paints him as the villain.

And yet Harrison deftly injects a subtle malice into his performance throughout. Nearly every interaction between the two leads is cordial but insidious. While Edgar only loses his cool a handful of times, his response to Wilson’s reactions ranges from coolly malevolent to downright evil. In one scene, a long-gestating plan of Edgar’s to make Wilson lose all credibility finally comes to fruition, and his reserved, mild pleasure as he watches Wilson’s life fall apart is haunting.

The most interesting part about Luce is that it presents itself as a conflict of ideas. Edgar is a child from Eritrea, adopted by well-off white parents. While he’s also very smart, athletic, and accomplished – and seen as such – he’s never able to escape the spectre of his past. He feels trapped by the societal idea that he needs to be more than just a kid adopted from a third world country, but also that by doing so, he’ll be little more than a “success story”. He’s acutely aware how people might see him based on the colour of his skin, but also that excelling as a black man just makes him an exception in the minds of many. He’s haunted by the idea that he both must excel to escape labels, but that by doing so he’s simply trading one label for another. This underlying thought is one of a few tantalizing philosophical discussions Luce touches on, and Harrison’s monologue explaining this is an emotionally-charged, powerful one. More than that, Harrison clearly takes this character motivation to heart, perfectly embodying a character that knows he’ll never be good enough – and perhaps believes “good enough” doesn’t exist.

Luce is a hard-hitting, philosophical drama, and one of the most surprising and excellent high school movies in recent memory. It didn’t come out during any of the prime times for Oscar movies, but could nevertheless have given some of the current favourites a run for their money. In a year filled with great performances, Harrison’s turn in Luce definitely shouldn’t be overlooked.

..And Who Got Robbed: Adam Sandler – Uncut Gems

Academy Award hopeful Adam Sandler is best known for his yearly appearances in crowd-pleasing comedies which generally range from critically ignored to critically reviled. With his reputation preceding him, audiences tend to forget that Sandler delivers fantastic dramatic performances under the right conditions. This year, those conditions were met with Uncut Gems.

Sandler plays Howard Ratner, a New York jeweler with elite clientele, a hundred-thousand-dollar debt, and a sports gambling addiction. When Howard receives a rock containing a rare Ethiopian opal valued at several million dollars, he sees an opportunity to gain new clients, eliminate his debt, and win big betting on basketball all at once (with mixed results).

Ratner moves and talks quickly; he’s loud and obnoxious and; he ignores and interrupts people while demanding they respect his time. He’s ultimately unpleasant to be around, but impossible to ignore. His situation, too, is precarious from the start. A supporting cast of debt collectors – at least one of whom is dangerously unstable with a deep contempt for Ratner – follows him everywhere. In a particularly memorable scene, Ratner notices two collectors in the audience at his daughter’s school play.

The movie is shot primarily in enclosed spaces, close to Sandler, and usually either very over or underexposed. By default, Uncut Gems is a tense movie. Sandler thrives in this environment, however, bringing an extra layer of tension through his frenetic performance as Ratner. Ratner’s energy, ambition, and dedication to absurd momentary thoughts is downright exhausting to watch, but impossible to look away from. One scene has the jeweller bothering an auction house receptionist, before running out to drive to Philadelphia. Within 10 minutes, Ratner is back in New York, has had a talk with his son and wife, gone to see Canadian rapper The Weeknd in concert, and had a falling out with the woman he’s cheating on his wife with. Not only is Sandler’s performance the stand-out moment of each of those scenes, barely two minutes later he gets to do it again once the next, equally busy day starts.

Uncut Gems has an excellent script, and highly talented directors. That said, it’s the movie’s lead actor that elevates it to one of 2019’s best movies. With his performance in Uncut Gems widely hailed as one of his best, many critics considered Sandler a strong contender come awards season. Unfortunately, Uncut Gems and Sandler were entirely ignored by the Academy. Sandler seems to enjoy making comedies with his friends, so it’s hard to predict whether when or what his next dramatic role will be, or even if there’ll be another.

On a recent episode of Howard Stern, Sandler recently joked that if he doesn’t get an Academy Award, he’ll make a movie “so bad on purpose just to make you all pay”.May he have mercy on our souls.