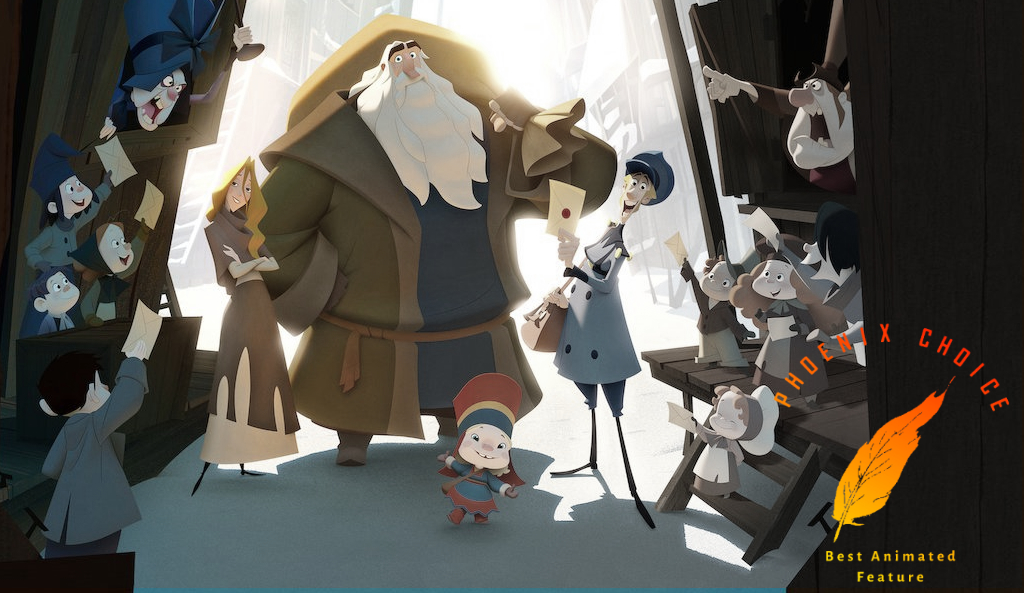 Who Should Win: Klaus

Klaus is an underdog in this year’s Best Animated Feature race, being both a Christmas movie and the directorial debut of Sergio Pablos. Despite this, Netflix’s low-fantasy holiday story is a truly excellent movie that puts a unique spin on the Santa Claus origin.

Klaus tells the story of postman Jesper Johansson (Jason Schwartzmann), the spoiled son of a postmaster general, who is sent to the distant island town of Smeerenburg with the mission to establish a successful post office. Not only is Smeerenburg isolated from the rest of the country, but it’s also split into two warring factions who refuse to communicate with each other. Though the task of establishing a post office initially seems unnecessary and impossible, Johansson soon meets the woodsman and toymaker Klaus (J. K. Simmons), who agrees to give the children of Smeerenburg toys in exchange for letters. Before long, Johansson is posting hundreds of letters from eager children and is well on his way to establishing a successful post office. Additionally, Johansson, Klaus, local school teacher Alva (Rashida Jones), and the newly energized schoolchildren begin to revitalize Smeerenburg, easing tensions between even the bitterest among the town’s rival factions.

Klaus is an endearing, uplifting animated feature featuring excellent performances, stunning visuals, and a heartwarming story about friendship. While that much is certainly par for the course when it comes to the Animated Feature Oscar, Klaus distinguishes itself with a truly unique take on the Santa Claus mythos.

Instead of asking why there’s a Santa Claus, or who Santa was/is, Klaus starts with the unusual question “Why do children write letters to Santa?” From there, it refuses to ask any other straightforward questions, instead building to answers in unconventional, often roundabout ways that provide much more satisfying payoffs than the traditional Christmas fare.

The key element is the character of Klaus, the large, bearded, imposing figure at the centre of the story. For most of its runtime, Klaus is content to keep its titular character shrouded in mystery, building him up slowly through limited interactions with Johansson. However, each of these interactions serves a specific purpose, usually adding some popular Santa-trait to Klaus’ character.

Initially, Klaus refuses to go out during the day, remaining as mysterious a figure to the people of Smeerenburg as he is to the audience. When children manage to catch a glimpse of him after staying up long past their bedtime, new rumours start to spread about Klaus. Some of those rumours include: Klaus comes down chimneys to deliver presents; Klaus has a sled that flies; if you leave a sock out on the mantle, Klaus will fill it with toys; Klaus only gives toys to good kids, while naughty kids get coal.

Klaus eschews magic entirely, opting instead for a semi-realistic portrayal of how rumours can turn someone unique into someone larger-than-life. At the start of the film, Klaus is little more than a reclusive old man who lives in the woods. By the end, he’s a legend around the world — and he gets to that point by answering children’s letters.

Who Got Snubbed: Buñuel in the Labyrinth of the Turtles

In August 2019, the Spanish Film Academy announced a shortlist of three films to compete for selection as the country’s entry for Best International Film at the 92nd Oscars. Of those, two deal with film directors during a pivotal moment in their lives. Though it ultimately wasn’t chosen, one of those was Buñuel in the Labyrinth of the Turtles, a dramatized “making of” for surrealist Luis Buñuel’s 1933 documentary Land Without Bread, which could have provided strong competition for Best Animated Feature.

Labyrinth takes place after the controversial release of Buñuel’s film The Golden Age. After a disastrous premiere in Paris, Buñuel is approached by an anthropologist and asked to film a documentary about Las Hurdes, one of the poorest regions in Spain. Though initially reluctant to create a non-fictional movie, Buñuel eventually gathers a crew and heads to Las Hurdes to film Land.

Labyrinth uses actual footage from Land mixed with expressive animation to show Buñuel’s distinct approach to filmmaking. Several shocking scenes are both rendered in two-dimensions and shown in three, including the decapitation of a chicken, footage of bees devouring a donkey’s corpse, and a goat falling down a mountain. In this way, the film shows Buñuel’s approach to obtaining footage that would be inconceivable today, while also stressing that the director actually conceived of and shot it.

The depiction of these scenes also forms the basis of Buñuel’s characterization throughout Labyrinth. Though the final footage is attention-grabbing, Labyrinth sees much of Buñuel’s grotesque depictions of animal suffering as exorbitant at best, and self-indulgent at worst. At several points, Buñuel is shown to have a random idea, stop everything, and force his crew to film while he or another associate torture or kill some animal without reason.

This tendency illustrates Buñuel’s biggest flaw: the director is entirely unwilling to compromise the truth he envisions in favour of the truth that exists. As a surrealist, Buñuel is haunted by bizarre, metaphorical nightmares that often blur the line between dreams and reality. As a contemporary of Salvador Dalí, Buñuel is unwilling to address his warped perception of reality for fear of compromising his status as a true surrealist. At the outset of Labyrinth, Buñuel is an egotistical, maniacal artist whose attempts to shock those around him usually go too far. It’s only after being repeatedly called out by his financier Ramon Acin and the people of Las Hurdes that Buñuel begins to see what’s right in front of him.

While Labyrinth ostensibly tells the story of the filming of Land, it uses this to tell a story about an out-of-control director learning to see the world for what it is and change it for the better. To that end, there’s also a healthy amount of social commentary through depictions of Las Hurdes in 1930. Land is a brutal depiction of Spanish poverty before the Spanish Civil War, and Labyrinth wisely chooses to show the same society from a different angle. Labyrinth frequently shows Buñuel paying for or arranging to shoot some poor person in a poor set doing poor things while ignoring the true plight of the impoverished around him. Characters tell Buñuel he can “do real good” with his documentary by bringing attention to the conditions in Las Hurdes. Labyrinth goes out of its way to show what that attention looks like – even if it takes its protagonist a while to get there.

Other Notable Snubs: Weathering With You; Abominable; Spies in Disguise