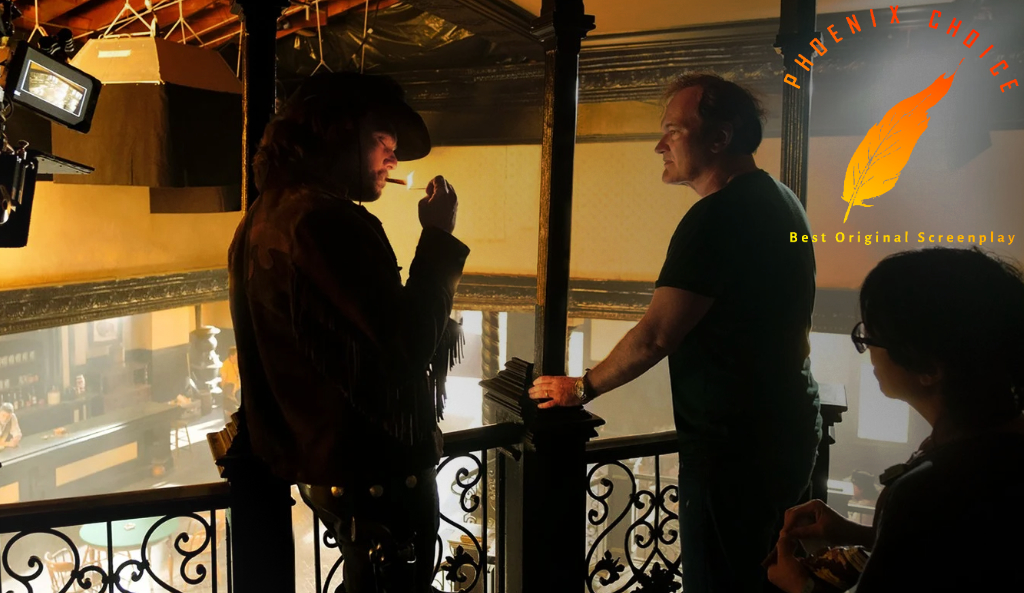 Who Should Win: Quentin Tarantino – Once Upon a Time… In Hollywood

It’s not an exaggeration to say that Quentin Tarantino is one of, if not the most recognizable and highly-regarded writer-directors working in Hollywood today. With juggernauts like Inglourious Basterds, Reservoir Dogs, and Pulp Fiction under his belt, just the mention of a new Quentin Tarantino film is enough to excite critics and audiences alike. It’s no surprise then that Once Upon a Time… In Hollywood, the director’s ninth movie, was one of the most hotly anticipated films of 2019 as soon as it was announced. When it was finally released, Once Upon a Time opened to critical acclaim and commercial success, although the result was quite different from what many expected.

Through three interweaving plotlines set in 1969, Once Upon a Time examines the lives of actors and filmmakers, the personality of Los Angeles, and the dark underbelly of American culture at the twilight of the Golden Age of Hollywood. Once Upon a Time is a smartly-written, loving homage to mid-20th century pop culture and the art of cinema. It’s also a very experimental film for Tarantino, toning down the director’s typical violence while emphasizing character interactions and slow-build dramatic moments. Of course, Tarantino has always had a penchant for punchy, insightful dialogue, but his earlier work has tended to sprinkle it in between gory, over-the-top fight scenes and massacres. In contrast, Once Upon a Time features several shots that are just Cliff Booth (Brad Pitt) driving for five minutes, and a ten-minute scene from Rick Dalton’s (Leonardo DiCaprio) pilot filming that all builds up to a three-second punchline. At the same time, Sharon Tate (Margot Robbie) is seen simply going about her day and living her life, unconnected to Dalton and Booth until late into the movie – and even then only tenuously.

Once Upon a Time is structured completely unlike any other nominee. Though the narrative is linear, it’s presented in a nonlinear fashion, playing out almost as a series of vignettes. The wonderful thing is that it works, and Once Upon a Time lands as one of the 2019’s best movies, despite forgoing the conventions of even its own director.

Once Upon a Time is a challenging movie. Not in that it’s difficult for an audience to appreciate, but rather in that it’s unlike anything Tarantino’s done before. While it’s unlikely to become anyone’s favourite Tarantino flick, Once Upon a Time shows that the writer-director is unafraid to take risks and make whatever interesting movie he wants to make. It shows that Tarantino can still grow and evolve as a filmmaker and promises an immensely exciting follow-up.

Who Got Snubbed: Tyler Nilson and Michael Schwartz – The Peanut Butter Falcon

The Peanut Butter Falcon tells the story of Zak (Zack Gottsagen), a 22-year-old with Down’s syndrome in North Carolina who dreams of becoming a professional wrestler. After escaping the care facility he lives in, Zak meets up with Tyler (Shia LaBeouf), a rogue crab fisherman, and the two embark on a journey to meet Zak’s favourite wrestler, the Salt Water Redneck (Thomas Haden Church).

The Peanut Butter Falcon is part coming-of-age story, part buddy-adventure, and plays to the strengths of both. Zak and Tyler are both motivated and endearing characters in their own rights, and Gottsagen and LaBeouf have excellent onscreen chemistry. While Tyler is a rough, no-nonsense mentor character, Zak not only keeps up, but challenges and softens Tyler into a lovable guy by the end. In fact, Zak’s infectious ambition and positivity makes Falcon a wonderful feel-good movie. Both the characters and the audience want to see Zak succeed, and the lengths to which characters go to help him are impressive, believable, and most of all fun. Zak’s roommate Carl (Bruce Dern) helps Zak break out of the care facility by greasing him up; Zak’s handler Eleanor (Dakotah Johnson) hunts him down, but ultimately becomes a companion to Zak and Tyler as they head towards the Redneck; once they find him, the Redneck even offers to teach Zak to wrestle.

Falcon is optimistic, but not blindly so. Zak and Tyler work hard and suffer in pursuit of their respective goals. Zak’s disability, recognizability, and unfamiliarity with general society means he must resort to covert means of getting to his goal. Tyler is in a similar boat – or maybe raft – after torching a co-worker’s crabbing supplies. Tyler is also still getting over the death of his brother, played by Jon Bernthal in a series of wordless but powerful flashbacks. Despite these setbacks, both characters overcome their struggles together, becoming fast friends along the way. As they do, their conversations form the basis for Falcon’s commentaries on disabilities, friendship, and overcoming adversity. What’s more, those conversations contain some of 2019’s best movie quotes, such as “I am young. And I am not old”, “You are not invited to my birthday party”, and “Yeah, you’re gonna die. Everybody’s gonna die, that’s not the question. The question is: Are they gonna have good stories to tell about you when you’re gone?”

Falcon is a low-budget, feel-good, indie drama about overcoming adversity. At first, it may not sound like a big deal, but after starting with a limited release, Falcon went on to get a wide release, make back more than three times its small budget, and become the sleeper indie hit of 2019. Falcon is a solid movie all around, and certainly the strongest elements are the clever writing and story.